The Top Killers of Team 600 and Frontstreet
March 27, 2017 by ChiraqRap
Chicago World News

Top Killers of Team 600 and Frontstreet 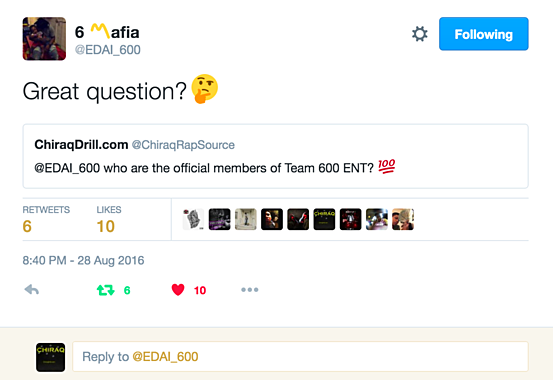 View the top killers of Team 600 and Frontstreet, as Chicago World News dispels the myth that many of your favorite rappers are “Shooters.”

Gang life is not glorious or without consequences – most of the shooters from Team 600 and Frontstreet are either dead or in jail.

D.Rose, who’s real name is Ahbir Sardin, is currently locked up for the murder of 14 year old Venzel Richardson.

Additionally, many believe that D.Rose did not commit the murder he was accused of, but his reputation and history caught up to him in a court of law.

Unfortunately, Cdai was sentenced to 38 years in prison for the murder of cab driver Javan Boyd.

Sadly, RondoNumbaNine was also sentenced to was sentenced to 39 years in prison for the crime of murdering a jitney cab driver back in 2014.

L’A Capone was born Leonard Anderson on September 18, 1996 in the South Side of Chicago, Illinois. L’A was murdered when a gunman approached him and shot him once in the thigh on September 26, 2013.

As L’A he made his way to the ER he suffered massive blood loss and died on the operating table. He was only 17 years old at the time he was killed. 3 individuals were charged in connection to the death of L’A Capone in 2014, Sakhee Hardy-Johnson, 17, Michael Mays, 21, and Meiko Buchanan, 22.